In Dec 2019, during Christmas break, we embarked on a two-week trip to visit Taiwan visiting Taipei, Tainan, Hsinchu, Kaohsiung and other locales, with plans for relaxing, shopping, sight-seeing, dining and entertainment.

After a comfortable flight, we landed in the TPE Airport in Taipei. At the airport, above each luggage carousel, they had cute displays of major cities/tourist areas around Taiwan. Since we were visiting Tainan, we had to take a photo of this one…

Upon landing in TPE, we came the to the realization that the reason why air tickets tended on the higher side this time, as well as the packed flight and airports, was because this was also an election year in Taiwan and everyone had come back to vote. Our realize would later be augmented by the realization that this was a busy season for travelers from other parts of Asia, as well as a lot of Hong Kong citizens taking a weekend vacation in Taiwan to get a respite from the conflicts at home.

As our flight arrived in the early morning hours, around 7a local time, it was too early to check into our hotel. So we went to check out some recommendations for friendly family fun/dining from a Taipei Parents Group on Facebook near our hotel.

We grabbed a quick lunch at a cafe adjacent to an arcade in the nearby shopping mall, where the kids had a fun time playing while we wait for our food to arrive. The kids were mesmerized by all the flashing lights and the super cute UFO prizes to be won.

Afterwards, still with time to kill, we headed over to Kidsburgh – Mermaid’s Home, a children’s play space that we visited 3/4 years ago on a trip to Taiwan. They’ve since had to move from their old location to a smaller new location, but my kids just had to go back even if it wouldn’t be the same.

Since our kids are finally over the age of 3, the attendants allowed us to leave them in the supervised play space while we got to go out and explore the local area. As we walked, we bumped into the hip and trendy ArTree Hotel that I had read about on another bloggers post and here it is in all it’s splendor.

We had considered staying at the ArTree, however they had very few accommodations for our group of 4 and everything was booked out. Upon visiting, I was actually glad we didn’t end up here. The style and design is very hip and edgy, whereas on vacation with kids I preferred a more cozy and warm place to return to after long days of play.

After some snacking along the way (oh how I love how Taiwan has street snacks all over the place), we meandered back to Kidsburgh to pick up the little ones and headed over to our hotel to check-in and turn in early, time to combat the jetlag. Goodnight.

Next morning, we woke up bright and early, thanks to jetlag. This was the day that we were going to meet up with a dear friend for lunch. Our friend had asked us what we were craving and our unanimous reply was, “something local and authentic” and that led us to… Du Hsiao Yueh 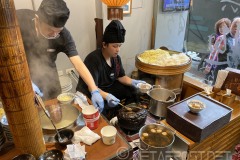 We had an amazing feast at Du Hsiao Yueh that the whole family loved. They are most famous for their Dan Zai noodles and I’ve marked this as a must-go place when in the area. In addition, this restaurant is located in a very fun and walkable part of town, surrounded by little shops and nearby dessert places. It is also said that the very original Din Tai Fung is also just a few min away on foot.

Since we were surrounded by desserts, we had to wash down our hearty meal with some Taiwanese shaved ice!

After lunch, there was yet more fun in store for the kids. We had a playdate that afternoon at another indoor/outdoor playspace in the city. So we made our way to the old, but popular, Mr. Tree.

Mr. Tree has multiple locations in Taipei and we had been to their other location before which was fully indoors. This was our first time to this location and we were surprised at their large outdoor space, which was perfect for their snow-blowing activity, as we were soon to experience.

After a very fun time with friends at Mr. Tree, we headed back to the hotel to turn rest up and turn in early. Another fun day.

For our 3rd day in Taipei, we were fortunate enough to have someone babysit the kids for us. Of course, we took this opportunity to visit the hip Harajuku-like district of XiMenDing and my favorite ESLite stores.

Every time we come visit Taiwan, I spend hours and hours in the ESLite stores. Their selection of gifts, books, housewares, crafts are so much more eclectic and thoughtfully designed than anywhere I’ve shopped elsewhere (having done lots of shopping in Singapore, my home the US, India, Britain, France and etc.). Of course, it was in an ESLite store years ago, where I first got introduced to this amazing brand of music boxes by Wooderful.

Within ESLite we picked up some souvenirs to bring back for family/friends, some items for the home and various gifts. When it was about time for lunch, we headed to the underground levels of ESLite to the food court and enjoyed a really nice meal with some very delicate desserts. Yum… 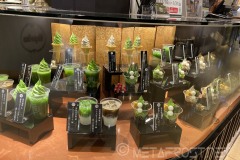 In Taipei, it is not unusual for public places, should as the Xinyi ESLite shopping mall to have underground areas that connect to nearby landmarks, such that you could literally spend all day just shopping, eating and browsing underground from mall to mall to landmark to mall and so on.

After I’ve finally had my fill of ESLite in Xinyi, we hopped on the MRT to XiMenDing…

Ximending is the hip fashion and food-centric district in Taipei. It is also the gay district of Taipei, from hospitals to cafes sporting rainbow banners. It has been compared to the Harajuku District of Japan and this is where you will see a lot of young Taiwan teens/tweens out and about, shopping for fashion, eating out with friends and a lot of foreigners hanging about. We ended our night with some great food at Ximending and headed back to our hotel to meet the kids.

On the 4th day, to compensate for not spending the previous day with the kids, we took them to the nearby, yet another amazing, kids play area called Kid Awesome! This was pretty much across the street from our hotel, so it was super convenient. We later learned from the locals that though Taiwan has tons of kids play areas, the older ones charge less as they age (despite being adequately maintained) and the newer ones charge prime rates. To us, since we only visit every several years, the old places were new to us, just as the new places are. But anyway, good to know, for budget considerations in the future.

So here is Kid Awesome!

Even though our admission let us spend the ENTIRE day here (they also allow in and out, however they did not allow drop-off), after several hours it was time to grab lunch, so we headed off to my favorite tea house, Chun Shui Tang at the nearby Shinkong Mitsukoshi mall.

Arriving at the Shinkong Mitsukoshi mall, we made our way through the bustling crowd to the popular Chun Shui Tang tea house. The wait was an hour long, but we put our name down and went to browse around the mall. Not an hour goes by and we got a text on our cell phone saying our table was ready. And here we go… enjoying many glasses of high quality milk teas with pearls, tea snacks and lunch!

After lunch, we took the kids to the Kids Area at Shinkong Mitsukoshi and they had an amazing time, with train rides, outdoor play space, coin-op vehicles to ride on, arts and craft activities and lots of children’s toys/clothes to shop.

After a very interesting walk on the sky bridge and looking over at the street performers and shoppers below us, we arrived at the BellaVita mall. BellaVita is an even more upscale mall than Shinkong Mitsukoshi and we are going there for something very special…. for some very amazing CHOCOLATES! 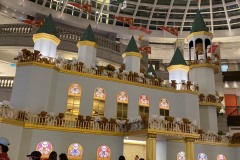 And what a packed day it’s been. For the next several days, we left Taipei to travel other parts of Taiwan. See you soon Taipei! It’s been loads of fun.

Taipei Spots on this leg of the trip

This site is an online reference (and community) of useful information that the site owner (and friends) check when needed. The content here gets updated with new information from time to time.